Create an Account - Increase your productivity, customize your experience, and engage in information you care about.

The Emerald Ash Borer (Agrilus planipennis) is an invasive wood-boring beetle native to east Asia. It is believed the pest was transported to the United States from China. It was discovered in southeastern Michigan in 2002 and has since spread to several eastern and midwestern states and Canada. EAB was first discovered in Wisconsin in Ozaukee county, and since then eleven Wisconsin counties have been quarantined, including Milwaukee and Ozaukee counties. 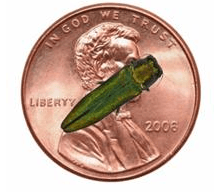